Today's post is about a semi-scarce Imperial Provincial Coinage struck in the now defunct, Fengtien(Fungtien) Mint.

This coin is one of the scarcer 20 cents pieces from the Imperial Provincial Coinage series. Minted in the Chinese sexagenary year of Jia Shen or "甲辰", it was minted in the Gregorian Year: 1904.

Moreover, this is only the common 20 cents coin from Fengtien Province.

Mine is in VF+ Condition 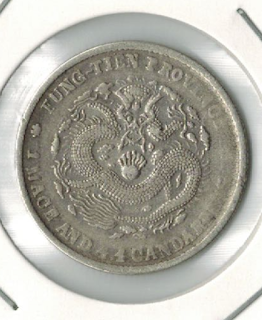 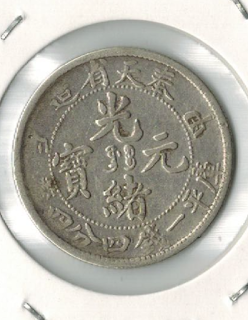 Mint Information:
The Fungtien Mint was located in the Northeastern Provinces that now consist of Liaoning, Heilongjiang, and Jillin Province. Eventually, by the end of the Guang Xu reign in 1908, the Fungtien Mint was replaced with the Manchurian Provinces Mint. The Fungtien Mint is famous for its rare early silver coin series, that consisted of the 5, 10, 20, 50 Cents and 1 Dollar, bearing its original legnd, "Tengtien". Moreover, their taels and dollars fetch record prices at modern Heritage, Stacks and Bowers auctions, and other auctions in Hong Kong.