There are two known varieties of this 20 cent coin presumably struck not in the Kirin (Jilin) Mint as struck, but rather in the Central Mint. The two varieties share an equal catalog value according to Krause. The first variety is an INCUSED mintmark, whereas the second variety is a RAISED mintmark.

Remarks:
Unlike the preceding issues of Kirin Coinage of the same denomination, this coin follows the newer Tai Ching Ti Kuo format. More specifically, there is a central mintmark with no English Legend. Also, the 4 Chinese characters on the obverse does not say the reigning emperor, but rather a uniform "silver or copper coin" legend.

This particular coin, struck in the TCTK dragon format is unique. Nearly all provincial coinage were struck with the side view dragon in addition to English legend. The legend "Tai Ching Ti Kuo" Silver/Copper coin are only for the later unifying coinage. Moreover, this coin is attributed to be minted not in the Kirin mint, but the Central Mint at Tientsin. This can be shown with the 4 Chinese characters in the obverse (Simplified): 造幣分厂 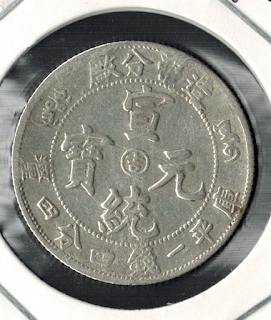 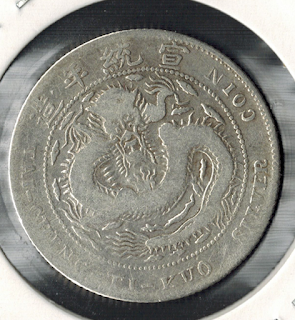 Mint Information:
From around 1905 onwards, the Qing Government decreed that all machine struck copper cash coins to be struck in the same layout. This meant that the observe had the same legend "Tai Ching Tong Bi" or "Great Qing Copper Coin". The reserve was the same, with the coiling dragon, surrounded by the English legend, "Tai-Ching-Ti-Kuo Copper Coin". The only way to see where these cash coins were minted was by looking at the central mintmark on the observe. Each provincial mint was denoted by a single Character. For example, this coin below has the central mintmark in Chinese,"吉" meaning Kirin Province or Jillin Province.


Labels: China Coin
Anthony Hui
Hi! I am studying Political Science and Pre-Business Studies at The University of North Carolina at Chapel Hill. I love to collect coins and study the field of numismatics!