Today's post is about a rather common Imperial Provincial Coinage struck in Sinkiang (Xinjiang) Province. 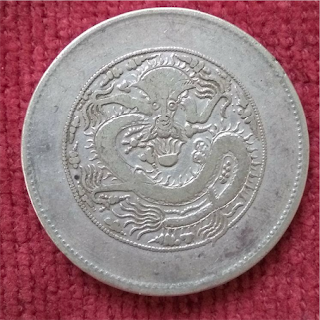 Country: China
Date: 1905 (Undated)
Dynasty: Qing
Region/Province: Sinkiang
Composition: Silver
Catalog: Krause: Y6.1
There are many varieties of this same denomination (5 Miscals) that was struck in the same year from Sinkiang Province. For instance, there are coins that have a different looking dragon, which in my opinion looks "fiercer". Moreover, there are other coins that have no beaded ring circle around the dragon. Finally, for this coin, there are varieties in the length of the brush stroke for the four characters in the obverse. There are other varieties that are not fully cataloged and attributed in Krause!

Sinkiang Province is now known as Xinjiang Autonomous Region. Historically, it has been a province of the various dynasties that ruled China, and for these coins, the Qing Dynasty. Nevertheless, today, this autonomous region is in the Northwest region of the People's Republic of China and has the capital at Urumqi (which was also the mint of one of the coins!). According to Wikipedia, the region "is home to a number of ethnic groups, including the Uyghur, Han, Kazakhs, Tibetans, Hui, Tajiks, Kyrgyz, Mongols, Russians and Xibe," and the Uyghurs are a focal point for today's current events. I will not get to that contentious topic here as this portion is for general background.

This coin is a rather common, but well struck 5 miscals coin. It is heavier than the standard imperial and republican half dollar weighing the 3 Mace and 6 Candareens. Note the transition of minting equipment for this province, as many used recut, reused dies, and some were hand cast and struck! Now this is a finer example.

Coinage struck in the province of Sinkiang (Xinjiang), located in the upper western side of China, is quite challenging. In the numismatic world, Sinkiang coinage is noted for its rarity in cast cash ("Red Cash") and the NUMEROUS varieties of silver coinage. More specifically, their smaller denomination silver imperial coins have tons of varieties ranging from the type of flower or rosette, a different dragon, etc. 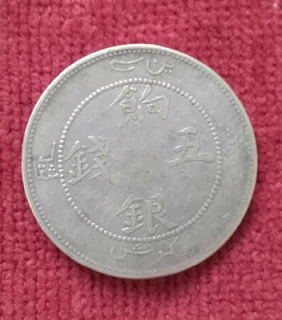 This coin is among the many struck at the many Sinkiang Mints. Mints include, Kuche, Urumchi, Tihwa, etc.

Besides Sinkiang's modern milled coinage, be sure to check out their cast coinage! The iconic and unique "red cash"!

Almost every other Chinese Empire and Provisional coin is struck with a clear weight and dimensions, bearing the weight in Mace and Candareens. These measurement units are seldom used today, and is most common in traditional Chinese herbal medicine shops! In Chinese, they are 分 and 錢 respectively.

Now, in Sinkiang Province of this era, they use an alternative and regional "variation" of this Chinese unit. It is called the Tael or Sar and Miscal.

The equivalent to the Sinkiang Tael or Sar is the Chinese Kuping (Treasury) Tael. The Sinkiang region uses not the Kuping tael but rather lighter Xianping Tael.

The equivalent to the Sinkiang Dollar is the standard "Chinese Dragon Dollar" bearing the 7 Mace and 2 Candareens Unit.

Finally, the Sinkiang Miscal is equal to the "Qian".

So in other words, this coin is worth 5 miscals/mace/Qian.