Remarks:
This coin, struck in Kiangnan Province, has a different dragon, compared to the other later year coins starting from 1900 (庚子) onwards. This dragon, in Chinese numismatic jargon, is called the "Old Kiangnan Dragon" or "老江南龙". A noticeably feature of this dragon is its wide face, short tail, and a different "grin". In my honest opinion, it looks cute unlike the imperial and scary looking Crocodilian grin of the other dragons. This "Old Kiangnan Dragon" design can be found exceptionally on later issues (1900 onwards) but ONLY ON 5 cent and 10 cent coins.

Going back to this coin, this coin has a uncommon rarity. As note, the older issued Kiangnan coins are generally more scarce. For instance, the Old Kiangnan Dragon Dollar with its numerous varieties, are very beautiful and expensive pieces. This particular coin has many varieties which encompasses a "Long and Short" dragon face varieties. The command similar market value.

The denomination of this coin is 20 cents, which has the Chinese weight of "1 Mace and 4.4 Candareens". 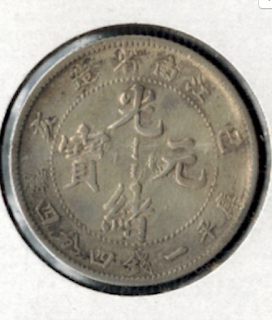 Mint Information:
The Kiangnan Mint was a modern one, that was situated in the Kiangnan Region. This region was part of the fertile Yangtze River basin, and encompassed the port city of Shanghai, then a foreign concession. The Kiangnan region, with its fertile soil was prosperous. Moreover, the area was subject to the industrialization and moderniziation reforms of the mid to late Qing Dynasty. For instance, during the Self Strengthening Reform Movement, the Kiangnan Arsenal which made locally produced weapons and munions was created. Additionally, the Kiangnan Mint was founded. The first series of coins from the Kiangnan mint was struck undated, in 1897. They are extremely beautiful coins with a different edge and rim designs, i.e Coiled and Ornamental.

Other Remarks:
From the turn of the 20th century, the Imperial Chinese Mint minted a series of Provincial Dragon Coinage. For silver coins, almost all featured the "Side View Dragon". For copper coinage, there were the side view, flying dragon (mimicking Japanese Design), the Dragon with Mountain (Water Dragon) and the unifying, "Tai Ching Ti Kuo" Dragons.