Today's post is about a common Imperial Provincial Coinage struck in the Fukien (Fujian) Mint.

*There are many varieties of the Fukien coin series. They feature different dragons, and the legend, especially on the Obverse is slightly different. I will have a coin from the same province, but from a different year posted soon*

A little bit of trivia, this dragon is called typically in Chinese Numismatic jargon as “小丑龙”, which means "A cute dragon". This is indeed true, as the dragon is noticeably different than the rather fierce and imperial dragon designs of other provinces. In my opinion, the face of this dragon of the 1903-1908 Fukien series is funny looking!

As noted before, there are many varieties of the Provincial Dragon coinage of Fukien province. The heading denoting provincial area in the obverse are slightly different. For example, this coin's english translation of the Chinese legend, "福建省造”, on the top of the obverse is "Made in Fukien Province". However, another set of coins from Fukien Province has the Chinese legend of "福建官局造", which translates to "Made in the Fukien Customs House Mint". These slight variations causes a difference in price and somewhat of variety for the coins of the higher denominations.

This is a very very small coin. The 5 Cent denomination in silver are by far the smallest sized coins issued by any Imperial Qing Mint. The Chinese imperial measurement equivalent is "3.6 Candareens".  This is struck in silver. 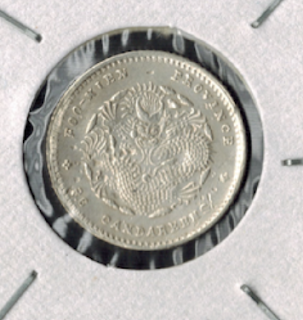 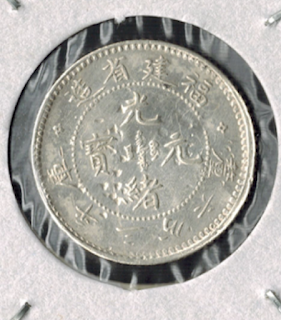 The Fukien Mint was known as the Foochow Mint. The mint was located in the modern day Fujian Province, in Southern China. Notable cities from Fujian Province include Xiamen (Amoy), Quanzhou, Foochow (Capital), and Wuyishan (Wuyi Mountain - Known for its "Red Robe" Ooolong Tea).
The Foochow mint was a modern and developed mint of Imperial China. The city was the more developed and industrialized compared to other cities and mints. The city of Foochow was a port, thus trade and manufacturing flourished. This is evident in the creation of the Foochow Naval Fleet during the Tongzhi Restoration, which saw action in the Sino-French War. Sorry for my digression :-).

The early pattern coins of the Fukien Mint, struck during the late 1890's are very rare. The dollar coin of denomination "7 Mace and 2 Candareens", is extremely rare!