Country: China
Date: 1898, (1901-1908)
Dynasty: Qing
Region/Province: Szechuen (Sichuan) Province
Composition: Silver
Catalog: Krause: Y256
*According to Krause, there are three known varieties of this denomination. The three varieties differ by the amount of flames on the fireball below the dragon's mouth. There are 5,6, and 7 flamed varieties. Each are equally scarce.*

Remarks:
Imperial coin struck in the Szechuen mint, especially the silver coins, are particularly scarce to rare. For instance, the Szechuan Mint's 1 dollar and 50 cent pieces are rare, especially the former's pattern strikes from dies prepared by the Ferracute Minting Company in the United States. Nevertheless, the smaller denominations, such as the 5, 10, and this 20 cents, are scarce. Their catalog values are higher than the 20 cents of other provinces. This particular coin, despite its worn appearance and low condition, sold for 275 dollars.

This coin features the typical layout of the provincial coins, with the emperor's name and currency type on the obverse in Chinese, and in English on the reverse. The dragon look is unique to Szechuan province as it processes the broader head.

Minted at the Chengtu Mint, utilizing soft dies, this coin is very unique! Coins minted at Szechuan Province is very scarce compared to most provinces, such as Kwangtung and Hupeh.

This coin has 5 flames on the pearl, hence its designation as Y256. 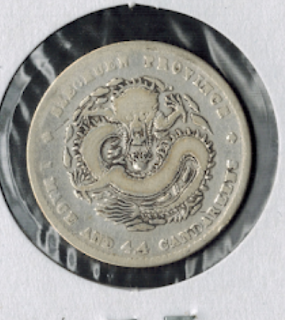 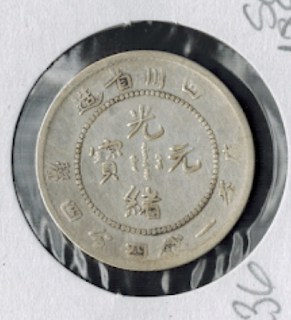 The Szechuan Mint is known for minting on of the first series of machine struck coinage, both silver and copper. Their notable and expensive pattern strike dollars were minted on dies acquired by the Ferracute Minting and Machinery Company in New Jersey. The Szechuan mint made quite a bit of milled copper cash, featuring various designs. I will post a stream of copper cash soon. Their silver coins were not issued for a long time like that of Kwangtung or Hupeh. Instead, the Szechuan mint ceased general production by the end of Guang Xu's reign.

Another notable aspect of the Szechuan mint is their issues of Szechuan Rupees. I will have one posted shortly.

From around 1905 onwards, the Qing Government decreed that all machine struck copper cash coins to be struck in the same layout. This meant that the observe had the same legend "Tai Ching Tong Bi" or "Great Qing Copper Coin". The reserve was the same, with the coiling dragon, surrounded by the English legend, "Tai-Ching-Ti-Kuo Copper Coin". The only way to see where these cash coins were minted was by looking at the central mintmark on the observe. Each provincial mint was denoted by a single Character. For example, this coin below has the central mintmark in Chinese,"吉" meaning Kirin Province or Jillin Province.