Today's post is about a scarce Korean Silver 1/2 Won struck during the Japanese Protectorate Era. It was minted with Japanese dies at the Osaka Mint.

The increased Japanese influence in the Protectorate era is very easily seen. The Protectorate Era began with the Russian Defeat in the Russo-Japanese War, and the signing of the Eulsa Treaty of 1905, also known as the "Japan–Korea Treaty of 1905". This treaty resulted because of the Japanese victory during the 1904-1905 war against Russia. This aforementioned treaty "deprived Korea of its diplomatic sovereignty and made Korea a protectorate of Imperial Japan" (Wikipedia).

Moreover, the overall layout of the coin is very "Japanese", especially compared to the 1 Yang and 5 Yang coins of the pre 1905 Treaty Korean Empire.

The Korean Protectorate government minted the scarce half won coins for 4 years, with a contract with the modern Japanese mint at Osaka. This coin in terms of catalog value, is the scarcest. Additionally, this coin is the last of the 4 year series (1905-1908).
As some historical background, the victory of Imperial Japan over Tsarist Russia during the 1904-05 Russo-Japanese War created many debts and numerous financial problems for Japan. As a result, many silver and copper Korean Protectorate coinage were shrunk in size. (Smaller Die Size) 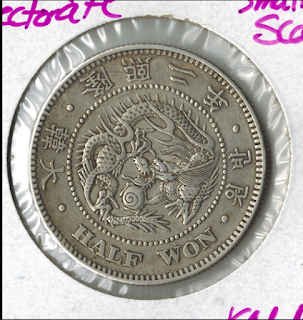 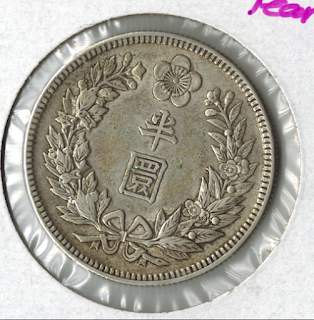 Out of the four minted 1/2 Won coins, the last two (Kwangmu Yr 11 and Yunghi Yr 2), are the smaller size. They are also the scarcest ones.