Today's post is about a scarce Korean Silver 1 Yang struck during the Korean Empire Era. It was minted at the Inchon Mint.

The Korean Empire was proclaimed in 1897 by the King Gojong of the Joseon Dynasty. This was in light to the recent Qing Chinese defeat against the Japan during the First Sino Japanese War of 1894-1895. Historically, Korea has been a vassal state to the Chinese for many centuries. However, with Qing defeat and the resulting Treaty of Shimonoseki, Qing China relinquished its Korea as her vassal state. Seeing that, Korea declared itself a sovreign nation with the newly proclaimed King Gojong as the Emperor Kwangmu. He is the first emperor of this new empire! (For the rulers during the Korean Empire, refer to the post titled "A Short Primer on Korean Kings (And Emperors) and their coins!").

Moreover, the proclamation was due to the subsequent Donghak Peasant Revolt and the Gabo Reforms (Referring to the Sexagenary Year) that soon took place. The Korean Empire was a short lived one, and is widely underrated in modern history. The Korean Empire had diplomatic ties with many foreign nations, including the United States, Italy, Japan, Great Britain, Russia, France, and so on.

For more information on the Korean Empire, visit:

Korean Yangs were primarily struck only in the Korean Empire Era. They are scarce coins that were minted in 3 years. They are Year 501, 502, and Kwangmu Year 2. The Kwangmu Year 2, especially the Wide Spaced YANG variety is the rarest of them all. The Year 502, is the most common out of the three.

In my current collection, I only have two- Year 501 and 502. I am currently wanting to collect the Kwangmu Year 2 coin in its two varieties!

Coins of the Korean Empire did not have the Japanese Influence on coin design that is seen in the protectorate era coinage. Instead, coins of the Korean empire have a dual design and a currency system that is not similar to that of Japan. Moreover, the reverse design features the Korean Hibiscus Flower and the currency denomination, 1 Yang in Hanja (Chinese Characters), in the center. The overall design is simple, yet beautiful! 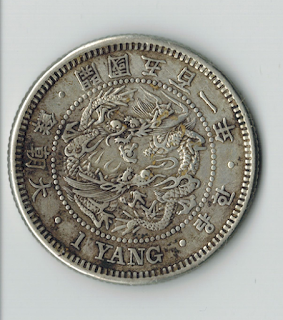 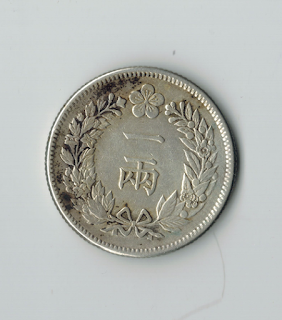 (Note the Mix of English, Korean, and Hanja/Chinese Characters)

The Korean 5 Yang, a silver dollar sized coin, is very rare! They feature the same design as the smaller  1 Yang. I currently do not have one in my collection! 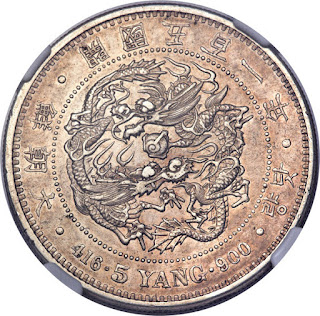