*This particular coin came from the older series of the silver coins from Yunnan Province. They are significantly scarcer than their new counterparts. I will be discussing them more in detail below. Nevertheless, many are familiar with the "New Yunnan" dragon coin variety, which though they depict Qing Legends, were actually struck from captured Qing dies, and thus struck in the Republican era. The most common coin with the New Yunnan type, is the 50 cents (3 mace and 6 candareens), which feature many varieties such as the number of circles below the dragon's pearl.*

There are rosettes dotting the sides on both sides. A nicely stuck coin with remaining luster and great details on the dragon. Dragon is different that that of later issue. 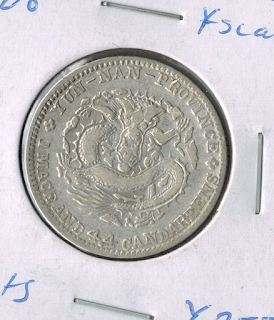 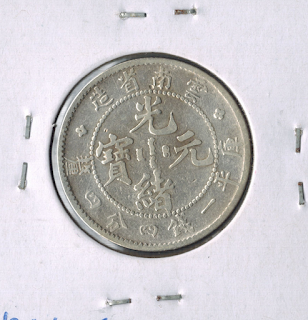 According to Lin Gwo Ming and Ma Tak Wo in their book, "Illustrated Catalog of Chinese Gold and Silver Coins (Ching and Republican Issues)", the modern milled coinage were struck in 1907, from "master dies supplied by the Tientsin Mint". This new Yunnan Mint was constructed in 1905, during the 31st Year of Kuang Hsu, which replaced the old Bao Yun mint that minted cast cash coins.