The Chinese coin collector is well acquainted to the significantly more common 10 cents coin from Hupeh Province. However, there is a lesser known and far more scarce coin series from Hunan Province, the southern neighbor of Hupeh Province.

Hunan Province is located in south central China. It has been the home province of the Chinese Communist leader, Mao Tse Tung (Mao Ze Dong), and the province is also known for its spicy style of cuisine.

The capital is Changsha.

This particular coin is a variety where there is single rosette besides the central, coiled dragon.

This coin is worn and circulated, with wear in the obverse. The reverse features the side view dragon, where some of the scales are present.

The dragon is identical to that of Hupeh Province.

The denomination is 10 cents, bearing the Chinese measurement of 7.2 Candareens. 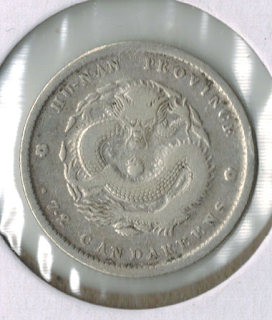 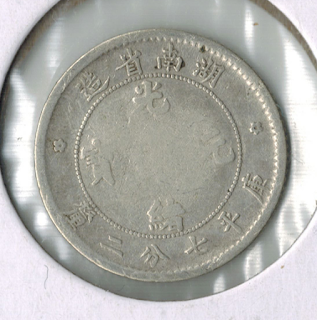 More specifically, their machine struck silver coinage during the Qing Era was before the turn of the 20th century. The 10 cents, was minted in three years, first in 1897, then in 1898 and finally, 1899.

Though this coin is worn and circulated, I am more than happy to add this coin to my Chinese silver collection! Especially from this scarcer province!

According to Lin Gwo Ming and Ma Tak Wo's "Illustrated Catalog of Chinese Gold and Silver Coins (Ching and Republican Issues)", these coins struck were actually struck in the neighboring Hupeh Mint. These milled coins of denomination 1 Mace and 4.4 Candareens (20 Cents) and 7.2 Candareens (10 Cents), were actually made in at the Hupeh Mint.

The Hunan Mint is a less known mint where the majority of coin issues were the bullion pieces of the late Qing Dynasty. Their dragon coins are less known and were actual struck in the Hupeh Mint. The Hunan series of dragon coinage are much more scarce than the Hupeh series.

Please note that the dragon designs are identical!