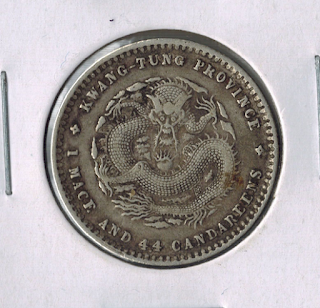 Nevertheless, these Kwangtung coins are very significant to the modern numismatic history of Qing China. This is because the first modern mint that struck machine struck (milled) coinage was at the Kwangtung mint in Canton (Guangzhou).

In 1888, the Qing government decided to contact the Heaton/Birmingham Mint in Great Britain to buy new dies for their new dollars. Typically, many know the weight of the ordinary Chinese dragon dollar-- 7 Mace and 2 Candareens. This is the weight of a Japanese Dragon Yen, or a Morgan Dollar. However, in the first coins struck by the Kwangtung Mint with these new dies, were slightly heavier, at 7 Mace and 3 Candareens for the dragon dollar. Why? This was because the Qing government wanted to bring competition against the foreign dollars used for trade at the time, such as the Spanish Peso, and the trade dollars of the United States and Japan.

For some great information on this background topic: https://www.coinworld.com/news/precious-metals/china_s-kwangtung-mint-was-once-worlds-largest.html

For reference, here are the first issue of the dragon coin series from Kwangtung. THEY ARE EXTREMELY COLLECTIBLE! So beautiful! Courtesy Google Images:

For more information on this scarce issue of this early Kwangtung series, in particular the "reversed legend" 50 cents (3 Mace and 6 Candareens) please visit: https://coinweek.com/auctions-news/ion-world-coins-kwangtung-mint-reversed-legends-pattern-50-centsheritage-auct/ 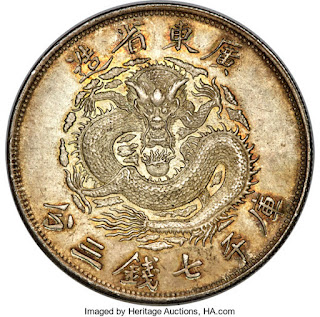 However, with the second issue of the Kwangtung series of the design shown above, the Chinese minting authority decided to REDUCE the weight to the typical, as we know today, of 7 Mace and 2 Candareens.

Soon after the first issue of the Kwangtung dragon series, there were one issued more commonly and for general circulation. My particular pair of coins are from that era. The dragons look slightly different, and the obverse and reverse stylistic, are different.

This pair of 20 cents are virtually identical in the dragon style, and overall layout and style. However, the only difference is the reigning emperor, which was Kuang Hsu for the 1890-1908 issue (on the left) and the Hsuan Tung for the 1909-1911 issue (on the right)

You can clearly see the emperor's name, in Chinese characters, on the second picture (obverses).

These two coins are circulated. 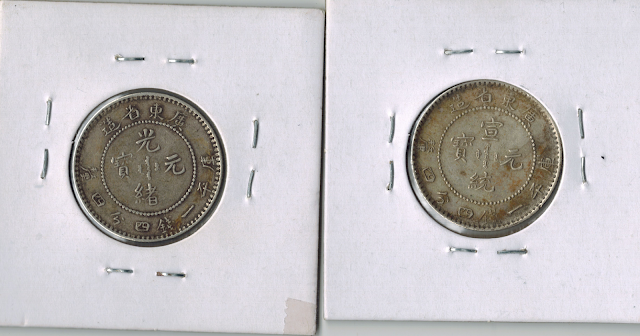 
The Kwangtung (Canton) Mint - All images courtesy of Wikipedia:


The Kwangtung Mint also known as the Canton Mint, and in Chinese "廣東造幣廠" was established in 1889, under the discretion of the Canton Provincial Government and with the supervision of Chang Chih-Tung, the Viceroy of Liangguang. As context, the Viceroy had jurisdiction of the entire province of Kwangtung or Canton. It was the first mint in China that utilized modern minting equipment and techniques through the importation of Western made coin dies from the Heaton-Birmingham mint of the UK. This mint did not issue cast coins. During its establishment, it was the largest mint in the world, producing 2.7 million coins per day.

Numismatically, the first dragon dollars (and smaller denominations), struck in silver, was first made here from those Western dies. Furthermore, the design, layout, and weight/denomination standarization of the Kwangtung coins served as important precedent in Chinese coins thereafter. Statistically, the mint measured 200 meters by 130 meters and operated with 90 minting presses compared to the 6 of the US mint.

The mint closed in 1931, then briefly reopened by the Kuomintang in 1949, before their retreat and defeat by the victorious Communists.