Today's post is a Chinese Qing Dynasty 20 Cash Coin from the Central Mint, not from a particular province! 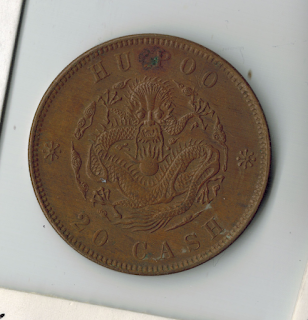 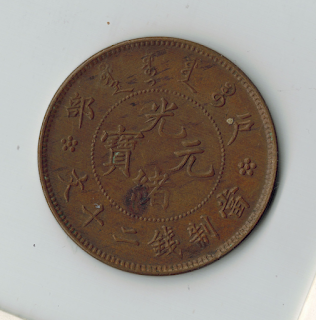 The Chinese Empire during the Qing Dynasty issued many machine struck or milled copper cash coins, as a replacement for the cast copper holed coins of the past several millennia.

In terms of design, there were many many many varieties, each commanding a different value. The first in series was imitating the Japanese Meiji Style flying and coiled dragon. This design was adopted by many different provinces. I will be posting many milled cash on my website soon. Furthermore, there are also water dragons, front facing coiled dragon, and more designs that varied from province to emperor reigns. In short, there are many different varieties---and that is a mission I am trying to complete throughout my career.

Eventually, by the early 1900's (from 1905 onwards), the Chinese Qing government issued a standardization, per se, of the milled copper cash, adopting the "Tai Ching Ti Kuo" copper coin layout, or TCTK for short. All the provinces and the central mints utilized this design from 1905 to 1909---throughout the reign of Guang Hsu and Hsuan Tung. These coins looked very similar, with the only noticeable difference being the central mintmark on the obverse. Finally, this TCTK layout was even used in silver coins as well!


Remarks on my coin:

Generally, the milled 20 Cash coins from the Qing Dynasty was issued--with varying designs--different provinces. Certain provinces like Fengtien or Kirin, were scarcer, compared to others. To be honest, my coin shown here is from the Central Mint in Tientsin, and is one of the most common 20 Cash known. They are much more affordable and common than their province specific counterparts. However, I would like note that the higher condition coins are more scarce, in general. This coin is in a better condition, which I can say is EF/AU.

In terms of the details, we are able to deduce the mint from the "户部" characters on the obverse, which means the General Central Mint. The dragon on the reverse is a standard coiled dragon that was utilized on the General Mint's 2, 5, 10, 20 milled cash coins. The details on the dragon is very clear---one can see the scales and claws and spines on the reverse. On the obverse, the characters denoting the Emperor and denomination (legends) are not smudged and legible.

Finally, on the obverse, we can see the rosettes, which allow us to delineate this particular variety. I will discuss this more on the variety in the future.


According to Krause's Standard Catalog of World Coins, there are 4 varieties of this series, which was produced from 1903-1905, generally.

* : Dragon is different in design. Face is more elongated.


The mint was burned down in 1912, by the start of the Republican Era, and was reopened in 1914 (Min Guo Year 3) for the production of the Silver Yuan Shikai 1 Dollars/Yuan. In 1921, the Central Mint was commissioned for the production of coins for neighboring provinces and their own respective mints. In 1927, the General Mint in Tientsin was superseded by one created by the powerful Nationalists in Nanking, and finally, a final one Shanghai in 1933, the latter known for their iconic Junk Dollars.