Today's feature is the iconic Fatman Dollar! One of the most well known Chinese coin designs!

The term Fatman refers to the man on the obverse of the coin, Yuan Shikai. A famous and important figure to the development of Modern China, since the late 1800's of the Qing Dynasty to the early years of the Republic. 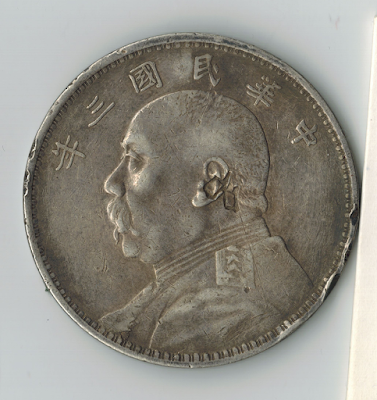 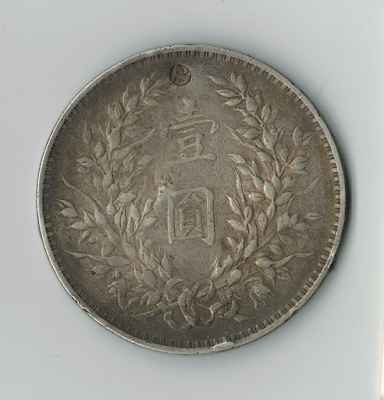 This particular coin was minted in the 3rd Year of the Republic, which is 1914 in the Gregorian Calendar. In order to calculate and convert from the Chinese Republican dating system to the Gregorian Calendar is simple. Note that the number on the coin represents how many years since the establishment of the Chinese Republic, which was founded in 1911. Therefore, since this is Year 3, one can calculate by adding 1911 + 3 = 1914 Gregorian.

My coin shown is circulated and worn. Moreover, there are visible damage and chopmarks that would give it a "details grade." More specifically, there are two chopmarks--one on the obverse and one on the reverse. The reverse character is a 正, which denotes genuine. This would be done by sellers and merchants to verify the fineness and value of the coin. Thus, in my opinion, even though this is a details grade, I really like the chopmark as it shows the history and validity of the coin! There are considerable edge nicks which could have been from accidental dropping or mishandling of the coin.

In terms of the visual aspects, the coin still retains the original Chinese characters. They are not worn and can be clearly delineated.

Translations are as follows:

Focussing on the obverse's leftward facing bust of General Yuan Shikai, we can still see some remnants of his hair. The focal point--his epaulets--are clearly visible. Moreover, his collar and overall uniform is clearly defined as well. On the reverse the wreath is clear and leaves can be seen. We can also see a nicely struck 正 chopmark. The central characters in between, denoting the denomination is clear--brushstrokes are visible.

In regards to both general and pattern issues, there are 4 denominations of the Fatman Series. They are:

The mintage dates are as follows:
$$: The 50 cents denomination is the rarest of them all! Very desirable coin!

The Tientsin Mint was the general issue mint of the Chinese Republican Government. They produced the Yuan Shikai "Fatman," Junk Dollar, Memento Dollar, and copper cash series. This was not a provincial mint but rather a centralized mint that gave general circulation coins for the entire China. Furthermore, comparatively, the Tientsin mint's minting equipment/dies were of higher quality (compared to Warlord Szechuan, etc) and output/production was higher.
Related: