Today's coin is a scarce 5 cent piece from Kirin Province. The Flower Basket variety! Read on to learn more about the many varieties of Kirin Province!

Remarks and this Variety (of the center):
This is indeed a small Chinese coin! The smallest in its series of silver machine struck coins. This particular coin was minted in 1898, and it is undated (without the sexagenary characters). 1898 would be "Wu Xu "戊戌"".

This particular coin is the Flower Basket center variety, a variety that was present on the earliest Kirin issues. This coin also has the "With Crosses" variety, which can be seen in the reverse of the coin, where there are two crosses flanking the legend "3 Candareens 6" on the lower bottom.

This coin is circulated and worn. The details are still there, yet scales are gone and legends are worn away.

Overall, silver coins from Kirin Province are generally scarcer, compared to their Hupeh and Kwangtung counterparts. This dragon is a distinctively from Kirin, with its wide face. We can also see the Manchurian Script flanking the dragon, denoting Kirin Province. 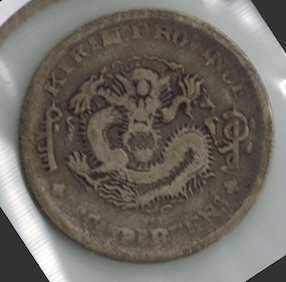 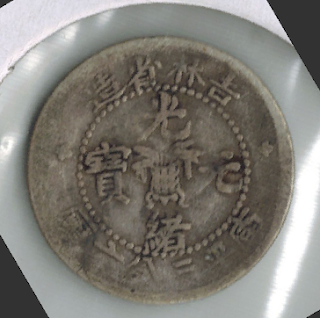 Various Center Varieties:
There are many varieties of coins from Kirin Province. One particular area of interest is the details in the CENTER of the coin (between the four characters), on the obverse.

The Kirin Mint was located in the Northeastern Provinces that now consist of Liaoning, Heilongjiang, and Jillin Province. Eventually, by the end of the Guang Xu reign in 1908, the Kirin Mint was replaced with the Manchurian Provinces Mint (sample coin: https://www.coinnumis.com/2018/12/china-imperial-coinage-7-scarce-1914-15.html).

The Jilin Mint minted various silver coinage from the small 5 cents (this particular coin) to the full sized dollars. Yet, their minting equipment was not as modern as that of other mints, such as Kwangtung and the Central Mint. Thus, many of the Kirin silver coins are soft struck, with a lower relief and details compared to that of other coins.

This particular coin was minted in 1898, which is part of the earlier series of coins from Kirin Province.

However, from around 1905 onwards, the Qing Government decreed that all machine struck copper cash coins (and eventually silver coins) to be struck in the same layout. This meant that the observe had the same legend "Tai Ching Tong Bi" or "Great Qing Copper Coin". The reserve was the same, with the coiling dragon, surrounded by the English legend, "Tai-Ching-Ti-Kuo Copper Coin". The only way to see where these cash coins were minted was by looking at the central mintmark on the observe. Each provincial mint was denoted by a single Character.

This new design is evident in my other coin from Kirin Province ( a silver 20 Cents), as posted here: https://www.coinnumis.com/2017/09/china-imperial-coinage-2-1908-kirin.html  (note the difference in overall style!) This coin was struck during the reign of Hsuan Tung, in 1910. The mint was the Branch Mint denoting Kirin Province.