Remember the silver Fatman dollar a few posts ago? Well today's post is its little brother! A 10 cent piece!

The term Fatman refers to the man on the obverse of the coin, Yuan Shikai. A famous and important figure to the development of Modern China, since the late 1800's of the Qing Dynasty to the early years of the Republic. 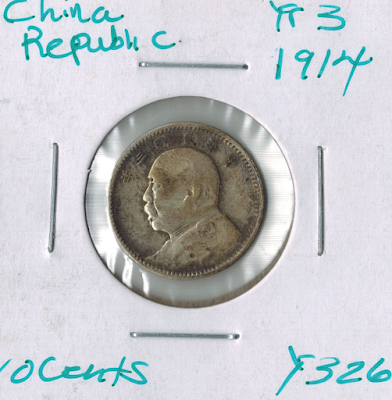 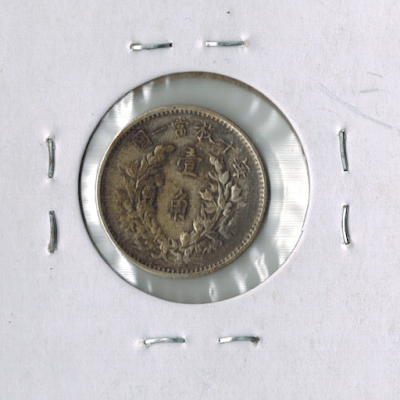 This particular coin was minted in the 3rd Year of the Republic, which is 1914 in the Gregorian Calendar. In order to calculate and convert from the Chinese Republican dating system to the Gregorian Calendar is simple. Note that the number on the coin represents how many years since the establishment of the Chinese Republic, which was founded in 1911. Therefore, since this is Year 3, one can calculate by adding 1911 + 3 = 1914 Gregorian.

My coin is a circulated coin and is worn. However, there are no worn out characters on both the obverse and reverse. The bust of Yuan Shikai is present, though worn. For instance, his epaulets are worn away on his left shoulder--an important point used for grading. On the reverse the wreath is clear and leaves can be seen. The central characters in between, denoting the denomination and the relationship to the Yuan is clear--brushstrokes are visible and I am able to tell whether this is the Fukien or the Tientsin Variety (more on that later!).

Overall, based on mintage figures and catalog and market values, the 10 cent is not the most common, which is the 20 cents.

The 10 cents is struck in silver at a .720 fineness. It is for general circulation during the Republican Era and even during the early years of the Communist Era (1949+).


Courtesy of Scott Semans, the Chinese (and Asian) Numismatics Guru!
In terms of coin varieties for this 10 cent coin (and the larger 20 cent coin), there are two known and attributed varieties. They are the Fukien and the Tientsin Varieties, which are named for their respective production mints.

My coin is a Tientsin Variety, not a Fukien Variety.

In order to delineate between the two varieties for 10 cent coins, emphasis must be placed on the 角 character. More specifically, the brushstrokes and composition of the character. According to the source from Scott Semans, one can tell by the shape of the top part of the 角 character.

In terms of value, I am unsure. I believe there should not be a drastic difference in price. The only rare issues of the Yuan Shikai series are the pattern series with the L.Giorgi name and others from foreign mints (UK, Austria, etc). They are obviously not in my collection. :-)

In regards to both general and pattern issues, there are 4 denominations of the Fatman Series. They are:

The mintage dates are as follows:
$$ The 50 cents denomination is the rarest of them all. Very desirable coin!

The Tientsin Mint was the general issue mint of the Chinese Republican Government. They produced the Yuan Shikai "Fatman," Junk Dollar, Memento Dollar, and copper cash series. This was not a provincial mint but rather a centralized mint that gave general circulation coins for the entire China. Furthermore, comparatively, the Tientsin mint's minting equipment/dies were of higher quality (compared to Warlord Szechuan, etc) and output/production was higher.