Not from the Central Mint where the usual Yuan Shi Kai "Fatman" and Sun Yat Sen Memento and Junk Dollars were struck, but from a provincial mint! Read on to learn more about the symbolism of this awesome and unique silver dollar!

Country: China
Date: 1912 (Year 元 meaning the "0" year. Basically the date where the Republic of China was founded, in 1912)
Dynasty: Republic
Region/Province: Szechuan (Military Government)
Composition: Silver
Catalog: Krause: Y456
Other notes: This is the slightly more common variety. The stroke of the "金" character on the Obverse of the coin is a single stroke line. There is not two dots which is present on the Y456.1 variety.

After the Xinhai Revolution, the new Republic of China is founded. Thousands of years of imperial and dynastic rule over China ceased. A new republic was proclaimed. Consequently, new coinage would be struck, with distinct characteristics. The Chinese imperial five-clawed dragon would be replaced with other emblems-- crossed flags, the dragon and phoenix, wheat ears-- and for this coin, the character "漢" denoting the Chinese people. It is truly a symbolic coin! A favorite of mine! 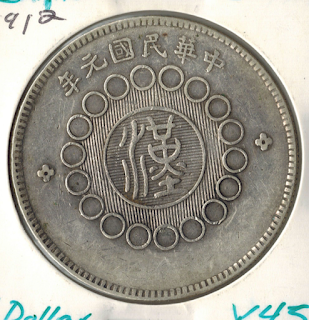 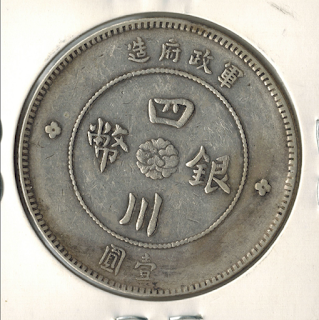 My favorite aspect about this coin is the unique feature of the interlocked circular rings on the reverse of the coin. This symbolizes the unity of the Chinese people, and their respective provinces, right after a period of turmoil--- the fall of the Qing and the proclamation of a new Republic.

Moreover, the central character is the 漢 character, denoting "Han" as in "Han Chinese" or the "Chinese People". "漢" represents the Chinese people, and the unity they have, immediately after the collapse of the Qing Dynasty.

This particular coin is a dollar sized, "Yuan" coin. It is the same size as an ordinary Republican 1 Yuan (Dollar) and a Qing Imperial Dragon dollar, with a weight of 7 mace and 2 candareens. Yet, this series of coins are slightly lighter than the 26.7 grams typical in standard silver dollars. Instead, this coin is 25.6 grams, slightly lighter, and with similar silver fineness (.890 fine).

There are two known varieties of this coin. In particular, the fourth stroke in the "Jin" character of the following: 銀 .

Variety 1: There is a straight line instead of two distinct and separate dots. (Common variety, mine pictured)

Variety 2: Instead of a straight line, there is the proper, two distinct dots. (Scarcer variety)

This coin was minted in by the Szechuan Military Authority Mint, issued in 1912, a year after the successful Xinhai Revolution of 1911.