The 5 cent piece is considerably scarcer and was minted only during the Kuang Hsu reign. However, note that this was only for general circulation, not pattern strikes.


Finally, for my additional posts on Kwangtung (廣東省造) coinage please refer to:

The Kwangtung mint issued a general circulation series of milled coins (5,10,20,50, cents and 1 Dollar) with the reduction of weight. For instance, the original pattern issue dollar was 7 Mace and 3 Candareens for the weight, whereas the dollar in the general issue is diminished to the standard weight of 7 Mace and 2 Candareens. This is much more uniform with the other provinces while maintaining the Kuping tael system.

This particular coin bears the Chinese weight of 3.6 Candareens and is equivalent to 5 Cents. It is very small and light, with a diameter smaller than that of a US Dime. Furthermore, this denomination is the smallest silver coin issued in the Chinese milled silver coin series.

As an old Hong Kong coin dealer told me, the scarcer coins in a series are typically the smaller or larger denominations (i.e 5 cents or a 50 cents). In comparison with the general issue Kwangtung series, the 5 cents, especially in high grades, are scarce. For instance, the catalog and market values between the 5 cents and the 20 cents (most common of all) is drastically different--- a quadrupling in price, at the least.

My coin is a circulated example of this scarce variety. On the obverse, the Chinese characters are clearly visible, yet they are worn from circulation. Manchurian script is also intact and readable---not smeared. The rims with the denticles are also present, though certainly not sharp. There is a noticeably corrosion mark below the "Yuan" / 元 character. On the reverse, there are at least 1/2 of the Dragon scales present, especially on the lower torso and the crest on the head. One can also see the five clawed definitively. The English legends are clear with no smudging of the characters. Overall a circulated coin with details fully visible. Sadly, again, there are some smears of corrosion on the bottom right of the obverse.

First Series - Different obverse and reverse. Made from dies shipped from the Heaton-Birmingham Mint in the UK. 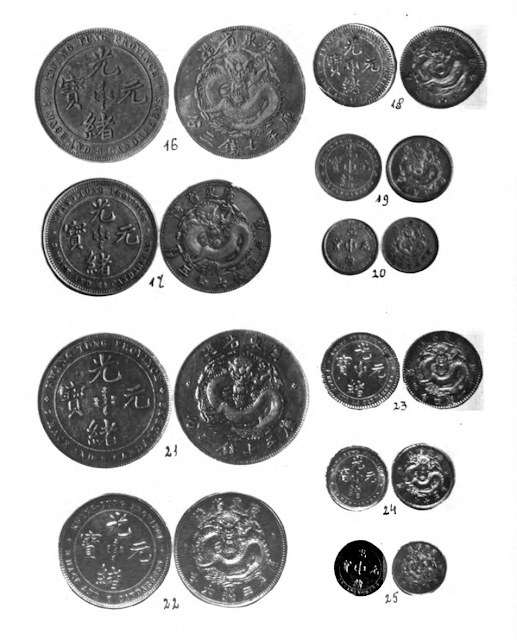 Subsequent General Issues - Different obverse and reverse. From domestic dies from the Kwangtung Mint. (This post's coin is number 30). 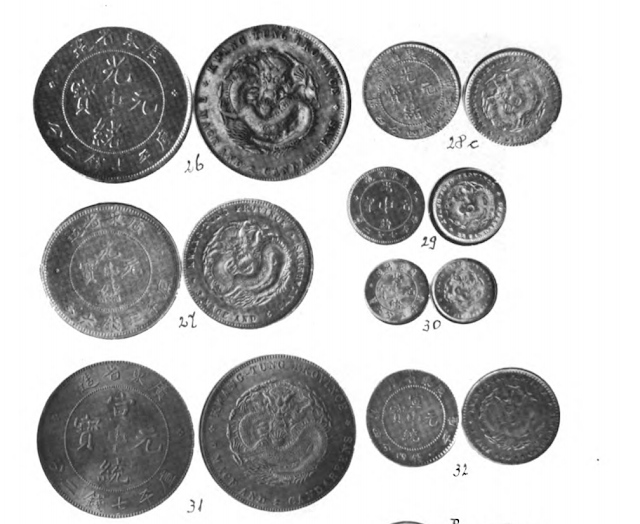 The Kwangtung (Canton) Mint - All images courtesy of Wikipedia:

The Kwangtung Mint also known as the Canton Mint, and in Chinese "廣東造幣廠" was established in 1889, under the discretion of the Canton Provincial Government and with the supervision of Chang Chih-Tung, the Viceroy of Liangguang. As context, the Viceroy had jurisdiction of the entire province of Kwangtung or Canton. It was the first mint in China that utilized modern minting equipment and techniques through the importation of Western made coin dies from the Heaton-Birmingham mint of the UK. This mint did not issue cast coins. During its establishment, it was the largest mint in the world, producing 2.7 million coins per day.

Numismatically, the first dragon dollars (and smaller denominations), struck in silver, was first made here from those Western dies. Furthermore, the design, layout, and weight/denomination standarization of the Kwangtung coins served as important precedent in Chinese coins thereafter. Statistically, the mint measured 200 meters by 130 meters and operated with 90 minting presses compared to the 6 of the US mint.

The mint closed in 1931, then briefly reopened by the Kuomintang in 1949, before their retreat and defeat by the victorious Communists.


Labels: China Coin
Anthony Hui
Hi! I am studying Political Science and Pre-Business Studies at The University of North Carolina at Chapel Hill. I love to collect coins and study the field of numismatics!