Today's post is about silver 20 cents from Kiangnan Province, a prolific minting province with a considerable series of dragon coins.

In terms of the rarity and scarcity of my coin, we must consider the overall rarity of coins from Kiangnan Province and compare it with other provinces. Relatively, 20 cent pieces struck from Kiangnan are more scarce and possess a higher catalog and market value compared to their Kwangtung and Hupeh counterparts. With my readings of catalogs, I would say the Kiangnan series are on par to the scarcity of the Manchurian (Hsuan Tung only) and Fukien Provinces.

My coin shown is circulated though it retains luster, which is a good sign. On the obverse, we are able to see the details of all the Chinese characters and legends, which denote the province and emperor, Guang Xu, along with the denomination, given as a weight of 1 Mace and 4.4 Candareens. Furthermore, the focal point which is the Manchurian scripts in the center, are evident and not smudged from wear.

On the reverse, the focal point of the five-clawed Imperial dragon must be considered. Here, we are able to see the body details such as the sharp claws, face with eyes, and hairy spines. However, there is some wear on the main focal point/area, which are the scales. In this coin, the circulation wear has worn off some of the scales on the center of area of the coin. Yet, the overall shape of the dragon is fully visible and strongly struck. Majority of the scales are present. Finally, the English legends bearing a translation of the Chinese on the obverse are nicely struck and not worn from wear.

On both sides, there are some wear on the rims and the denticles, which have become soft and mushy... they are not sharp and visible.

With these comments in mind, I would grade this coin a XF with luster.


The Sexagenary Dating System (a conversion): 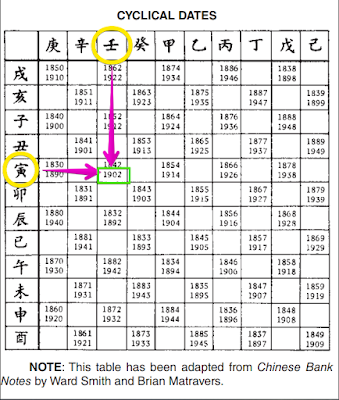