Today's post is a Copper-Nickel 5 Chon minted during the Japanese Protectorate era of Korea.

The Korean Protectorate Era produced 4 of these series.

Nota Bene:
*; The Russian Eagle coin from 1902 is the scarcest of them all, originally meant as pattern and unissued for general circulation pieces. The Korean government commissioned a Russian minting minister to oversee the production of these. Instead of bearing a Korean Phoenix/Eagle, it features the distinctively Tsarist Russian Imperial Eagle. It shows the increasing influence of foreign powers onto Korea---from the Chinese, to the Japanese, and to the Russians. The weight is 4.3 grams.

**; This is my coin, which was produced for general circulation under the 9th year of Emperor Kwangmu. It is larger in size compared to the Russian Eagle coin from 1902. Instead of 4.3 grams, it is 4.5 grams. This coin is the second commonest, after the Kwangmu Year 11 5 Chon.
***; The Kwangmu 11th year 5 Chon was produced in the largest quantity. It bears the same weight as the Kwangmu 9th year coin at 4.5 grams. It is last 5 chon coin from the Kwangmu era.
$; The only 5 chon produced by the Yung Hi era was in the 3rd year of his reign, which was 1909. This coin is highly rare and valuable, with valuations close to that of the Imperial Eagle Coin. The mintage figure according to the more recent Krause publications is unknown. However, turning to one of mine from the 80's there was only 2 million produced! VERY SCARCE!

Coin looks similar to the Japanese Copper-Nickel 5 Sen from the Meiji era? Read on for more information!

The increased Japanese influence in the Protectorate era is very easily seen. The Protectorate Era began with the Russian defeat in the Russo-Japanese War, and the signing of the Eulsa Treaty of 1905, also known as the "Japan–Korea Treaty of 1905." This treaty resulted because of the Japanese victory during the 1904-1905 war against Russia. This aforementioned treaty "deprived Korea of its diplomatic sovereignty and made Korea a protectorate of Imperial Japan" (Wikipedia).

This particular coin is sharply struck, with strong details present on the Korean Phoenix on the obverse. We are able to feathers on the wings and the cloud wisps at the bottom. Furthermore, on the obverse, the Chinese "Hanja" and Korean characters denoting Emperor and denomination are visible and unworn.

On the reverse, the flowers and leaves that compose the wreath are also clearly defined. There are some smudging on the high areas, but the overall shape can be delineated.

Overall, a coin in a XF grade.

The Korean Coins minted in the Japanese Protectorate Era bear uncanny and nearly identical appearance to the Sen Coins of Imperial Meiji Japan.

As background, the Korean Coins minted in the Japanese Protectorate Era bear uncanny and nearly identical appearance to the Sen Coins of Imperial Meiji Japan. For instance, there is the identical size, composition, similar legend layout, and the identical Japanese coiled and flying dragon. Moreover, the Korean silver and copper Chon and won coins were minted under contract by the Imperial Japanese Mint in Osaka, Japan. This was the same mint that produced the general issue coinage of Japan.

As some historical background, the victory of Imperial Japan over Tsarist Russia during the 1904-05 Russo-Japanese War created many debts and numerous financial problems for Japan. As a result, many silver and copper Korean Protectorate coinage were shrunk in size. (Smaller Die Size) 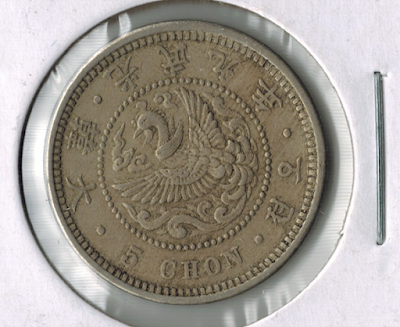 The Korean Yang (and the currency system)

My other coins from the Korean Joseon, Empire, and Protectorate Eras