British Colonialism of Hong Kong and its Effect on Modern State Creation: An Introduction

[Posted 19 May 2020 - Anthony Hui - Comparative Politics]
British Colonialism of Hong Kong and its Effect on Modern State Creation: An Introduction
In the realm of world history and international politics, the British Empire is considered by many historians, political scientists, and other scholars to be a powerful political force that defined and epitomized the notion of an ever growing global power that brought forth important and significant political ramifications. From its rise from the 16th and 17th century to its peak during the early 20th century, the British Empire had a straightforward objective for exploration and discovery and then for subsequent colonization and ambitious empire building. Throughout modern world history, there were many cases of British colonialism and imperialism around the world. For instance, the British victory over the French in the North American theater of the Seven Years War (1756-1763) secured British dominance in the present day United States. Nearly 80 years later in 1839, Britain declared war on Qing China regarding the issue of the opium trade and its relation to free trade and enterprise. Britain’s decisive victory in the First Opium War and the subsequent 1842 Treaty of Nanking, along with further victories in the Arrow War (1856-1860), led to the not only the cession of Hong Kong but also the nascent political influence of Britain in the East Asian sphere. Nearly another 30 years later in South Africa, the British victory in the Anglo-Zulu War of 1879 warranted the annexation of Zulu lands by the British and allowed the British to consolidate a European presence in the African continent. With these global historical cases in mind, Britain’s ambitious and wide reaching empire and colony building eventually led to its peak around 1913 to 1920, which according to the CIA World Factbook, “held sway over 412 million people, 23% of the world population at the time,” and “covered 35,500,000 square kilometers” or “24% of the Earth's total land area.” These statistics and figures ultimately underscore the British Empire’s title of being the largest territorial empire in history and the resulting famous phrase, “the empire on which the sun never sets.” Politically, the expansive British colonization that spanned nearly all the globe’s continents contributed to the global spread of the modern state system. Altogether, Britain’s colonization and imperialism had a broad and regional political impact that would ultimately bring forth and introduce new political institutions and features that check and mostly satisfy both the classical/ideal and minimal definitions/characteristics of the modern state system. Such a case can be demonstrated with the former British colony of Hong Kong (1842-1997), which satisfied the characteristics of sovereignty, bureaucracy, and impersonality.

As mentioned before, the British victories in the First and Second Opium Wars led to the rapid colonization of what is present day Hong Kong. From the British colonization of Hong Kong Island in 1842 to the annexation of the Kowloon Peninsula in 1860 and finally the leasing of the New Territories in 1898, the British would have a platform for creating and building a modern state system in Hong Kong and more broadly, the successful spread of the modern state system from a European country to a region in East Asia.

The most obvious and direct evidence of the British creation of a modern state in Hong Kong from 1842 to 1997 would be Britain’s territorial sovereignty (territory and sovereignty criteria) over Hong Kong. From the planting of the Union Jack on January 26th, 1841 in Possession Point, Hong Kong Island, to the incorporation of Hong Kong as a Royal Colony in the growing British Empire in 1843, the British Crown would ultimately exercise total political and ultimate control over the demarcated territory. Additionally, the neighboring Qing Government in the Mainland and Portugese Macau could not exercise any influence on this British Colony, therefore elucidating the international recognition and political acknowledgement of the British Hong Kong state. The textbook also mentions the second meaning of sovereignty, which is sovereignty as “the source of legitimate authority.” British Hong Kong satisfies this second meaning because both the government in Britain and the local government in Hong Kong could exercise, as what the textbook says, a “monopoly on the [legitimate] use of force.” More specifically, the central authority in the Colonial Hong Kong sense could be the British Crown, which enacted laws and legislation from afar that was implemented and executed by appointed Governors, a Royal Hong Kong Police Force, and local military garrisons. Thus, this “monopoly on the use of force” was from a legitimate authority that was well established and grounded in political and legal principles in domestic Hong Kong affairs.

British Hong Kong also brought forth and effectively implemented a new and Western based bureaucratic and judicial system. For context, the Qing Dynasty (and preceding ones) that ruled Guangdong Province, which encapsulated Hong Kong, implemented the Chinese Yamen system. The Yamen system had the bureaucratic element of a local Han or Manchu Mandarin that would take care of local and regional matters for the Viceroy of Liangguang or Canton and the overarching national Qing government in Beijing. Additionally, the Yamen system also had a judicial facet by serving as a prefectural and provincial magistracy. With these in mind, an important and distinctive Yamen was installed and manned by the Qing in the Kowloon Walled City in Hong Kong. However, the arrival of the British and subsequent colonial rule led to the abolishment of the Yamen system and the implementation of the British civil system and bureaucracy that was based on merit and expertise. The British bureaucracy in Hong Kong also had an organized system that had a more straightforward and direct reporting to higher up positions when compared to the Chinese system, that often involved local Mandarins and officials and many different symbolic and actual positions (governors, viceroys, princes, and emperors). Furthermore, the textbook defines an efficient bureaucracy as “being the most effective way to organize collective action in pursuit of common projects” like the “military.” The British government had control of British forces that composed and safeguarded the broader Empire. This included border protection from Mainland China, which was used till the day of Handover in 1997, and the actual British garrison that valiantly but futilely defended Hong Kong from Japanese invasion in late 1941. This would be contrasted with the less organized Qing military system that was usually composed of provincial troops led by viceroys or the Manchurian Eight-Banner System that was organized by the Royalty in Beijing. In addition to bureaucratic efficient changes and reform, the British brought forth a common law system that was based on judicial precedent and not on any roots from the previous Qing system of code law. From an institutional standpoint, the British colonization brought forth new institutions such as (local, appellate, supreme) courts, a (Royal) Police Force, and institutions that had direct British influence. Yet, I would argue that there was not necessarily rule of law, which according to the textbook is where the law “is consistently applied equally to all.” This was because with historical and social observation, there was unfair treatment between the British and the Chinese Hong Kongers during the colonial era.

Finally, the British colonization of Hong Kong led to the creation of the modern state system because the state (and its relationship to the entire whole of the British Empire) was impersonal. There are many factors I believe lead to the impersonal nature, which include what the textbook says is the modern state’s “bureaucratic character” which is mentioned before, along with what I believe are some important facets: the government itself of Colonial Hong Kong and Britain along with the theme of citizenship. I will discuss these two points. For context, the textbook gives the example of how having a president that regards the Constitution as the manifestation of his/her will would invoke an illegitimate government and certainly lead to a “personal” state. This is because the head of state or government would essentially be a dictator that would have unchecked power and authority. In the case of Colonial Hong Kong, this was not the case because there was a strong Constitutional law basis and the checks from the legislatures and executives of both Britain and local Hong Kong. Also, cults of personality that are often related to dictatorial rule would not arise as well, therefore strengthening the impersonality of the state. In regards to citizenship, this concept was in place in British Hong Kong, where people were given representation to some degree and treatment before the law. Though there was still unfair treatment between the socially and economically upper class that was generally composed of British people and the lower class ethnically Chinese Hong Kongers. 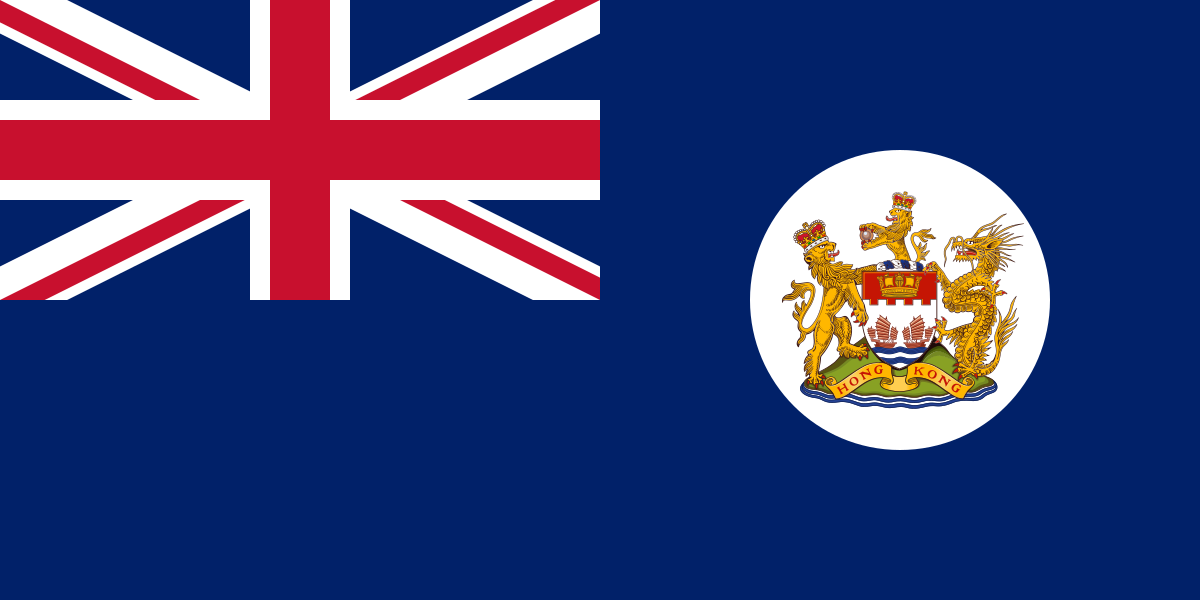 The Flag of Colonial Hong Kong
(1959-1997)
Note, there are multiple versions of the Colonial flag since the possession of Hong Kong island with the British victory in the First Opium War against the Chinese Qing Dynasty.

The Former Qing Yamen in Present Day Kowloon Walled City Park
(Went there myself two summers ago!)
Labels: History Hong Kong Political Science
Anthony Hui
Hi! I am studying Political Science and Pre-Business Studies at The University of North Carolina at Chapel Hill. I love to collect coins and study the field of numismatics!