My name is Nathan Infante and I am currently a high-school junior that is studying in the San Francisco Bay Area. I am what people call a young numismatist, a coin collector who is under the age of 20 years old, and I have been collecting coins for about half of my life.

As as numismatist, my main area of specialty is in Philippine coins and banknotes, specifically those that were minted, or issued, during the U.S occupation (1903-1935), Philippine Commonwealth (1936-1946), and Philippine Republic (1946-Present). If you have any Filipino coins and banknotes from 1903 to the present, I'll most likely be able to give you some information about them!

This interest in Philippine coins arose as a result of my travels to the Philippines when I was much younger. As a son of Filipino immigrants to the United States, my parents often took me back to Manila to meet family and friends and learn about the nation and culture that my family always talked about back in America. Two years prior to my first major trip to the Philippines, I had been collecting coins from any part of the world after traveling to Canada when I was about 7 years old, where my interest in different kinds of money came from. However, it wasn't until my family took a trip to the Philippines around 2014, when I was 9 years old, that I began to start specializing in Philippine coins. My parents, especially my mother, knew that I loved collecting coins so they brought me to the local coins stores in Manila, where I met many nice Filipino coin dealers who were very welcoming to a Filipino-American kid who wanted to collect coins.

It was at one coin shop in particular that piqued my interest in Filipino coins and banknotes. Surprisingly, this coin shop was located in a very busy Filipino Muslim marketplace which is known for selling many fake items such as fake handbags and electronics. At this coin shop, the coin dealer, who was a Filipino man who was in his mid-50s, was very welcoming to me as a new collector of Philippine coins. It was over here, at his shop, where I was able to see many beautiful high grade Philippine coins that were over 100 years old. The old man had even given me lots of discounts and free coins on account of me being extremely young when I went to his shop several times during the summer of 2014. Following my 2014 trip to the Philippines, I would return to the island nation several times with my family and would be able to do more business with the dealer I had previously discussed about and would meet even more Filipino numistmatists and coin dealers, many of whom were welcoming, and even shocked, when meeting me at coin stores or events during my travels. This hospitality from Filipino numistmatists and dealers, along with exposure to many beautiful Filipino coins, caused me to eventually focus on collecting Filipino coins and banknotes.

Besides coin collecting, I am interested in photography, video gaming, and learning about history and politics. As of writing this, I've been playing video games such as PUBG, Call of Duty, Pokémon, and Genshin Impact. One of the reasons why I like learning about history and politics is that I'm able to learn why nations in our current world are in their current situations, as a result of their past history and current political situations. 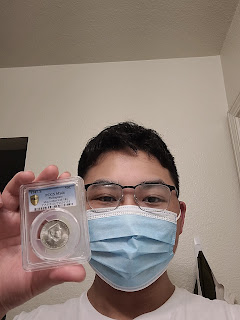